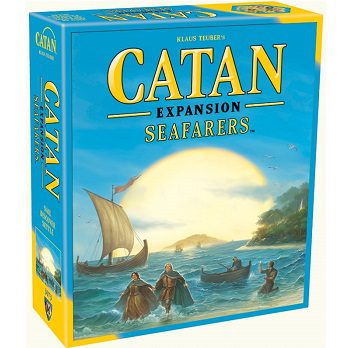 Nine voyages of discovery are awaiting the settlers. The expansion can also be combined with Catan: Traders & Barbarians and Catan: Cities & Knights. Requires the Base Game to play.

The Seafarers expansion contains new frame pieces, which can be used to assemble frames of variable size. In these frames, you lay out combinations of islands that are always different, using the hexes from the Catan base game and additional hexes from the expansion set – either as shown in the scenario diagrams or according to your own imagination.

There is, however, one important exception: you may change the position of the front ships of a shipping route! That way, you can respond more flexibly to your opponents’ actions and possibly be the first to reach an unsettled, productive island.

Other new features are the gold fields, which help their neighbors obtain any type of resource, and the pirate, who causes unrest on the peaceful seas.

This expansion is not a standalone game. Requires the Catan base game to play.