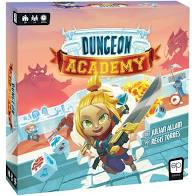 Time to enter a dungeon — a dungeon composed of dice! — to kill monsters and score as much as possible.

In Dungeon Academy, each player has a piece of paper that shows four dungeons, with each dungeon being a 4×4 grid. The game lasts four rounds, and in each round you will go through one of these dungeons. Each player also has a character card that shows some amount of life (red) and mana (blue) along with a special power.

What’s actually in a dungeon is determined by dice that you roll at the start of the round. You roll sixteen dice, then let them settle in a 4×4 grid. The dice show red and blue monsters in both small and large sizes, as well as blue potions and red strength. You decide where to enter the dice dungeon and which dice to pass through in a continuous line that can change directions only orthogonally, and you draw this corresponding line on your personal grid until you exit at some other point of the dungeon without crossing over your line. You then claim the lowest available number card, with the number of cards matching the number of players.

Once everyone has finished drawing a line through the dungeon, you trace out that path step by step, removing life (1 or 2) to defeat red monsters (small or large) and mana (1 or 2) to defeat blue monsters (small or large). You place new tokens on your character as you pass through potions and strength spaces. Once you’re through the grid, you score points for the monsters you defeated, and you choose one of four quests on your sheet for bonus points. (In the second round, you choose one of the three remaining quests, so your choices diminish over time.) In player order based on your number card, you take one of the available treasures, which provide points and powers. Your life and mana levels carry over into the next round.

In the second and third rounds, you replace one of the dice with a labyrinth die that can be passed through only in certain directions, and in the fourth round another die is replaced with the big boss die, giving you something giant to take on before ending the game and tallying your final score.